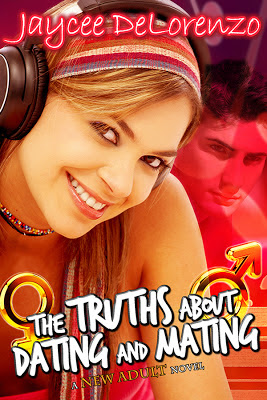 Jaycee DeLorenzo's book The Truths About Dating and Mating hit the market this week, and I have an exclusive interview with her. For those interested, Jaycee is also doing a rafflecopter giveaway! But first:

Spunky Italian coed Ivy Rossini likes to talk and push the boundaries. She gets to do both as she co-hosts Riordan College’s radio program, The Truths about Dating and Mating, alongside her lifelong best friend, Ian Hollister.

Being the only girl who cares to see beyond Ian’s bad boy reputation has its advantages, especially when he’s scaring off the jerks who just want to nail the campus sex-guru. It’s when he’s “protecting” her from the advances she welcomes that she wants to lob him over the head and tell him to butt out. But Ivy’s feels like she’s the one who’s taken a hit when Ian almost kisses her at a party. She knows she should feel relieved when he pulls away, so why is she disappointed instead?

With their friendship and her heart hanging in the balance, can Ivy follow the advice she and Ian give their listeners--to communicate, be honest, and trust in themselves--or will insecurity, stubbornness, and pride ruin any chance of their relationship getting off the ground?

Aja: How did you come up with the idea for The Truths about Dating and Mating (TDM)?

Jaycee: I was listening to Loveline one night over ten years ago, and a question was answered in a way that I didn’t like. I blurted out my own answer, something a little sarcastic but truthful. And I was like, “I should write a story with Loveline for the college set, with a romance…ooh, with best friends.”

Aja: Are there any personal experiences from you or someone you know in this book?

Jaycee: Some of the mistakes Ivy makes–while not in the same situations–are ones I’ve made in the past, mainly due to insecurity, fear of what others think, and having a bit of a temper.

Jaycee: That’s actually easy. While I love–and sometimes wanted to strangle–my main characters, my absolute favorite is Casey because he’s a really sweet guy, a total gentleman, and very socially awkward, but also very observant. It’s always the ones that fall in the background who tend to know and see the most.

Aja: And what makes you want to write? What has become your favorite part of the writing process?

Jaycee: I write because my head feels like it’s always going "What if this? What if that?" I have stories that get into my head and I like to put them on paper. My favorite part of the writing process has to be writing the summary–total plotter, here!–and setting my end goals. I then love the drafting and trying to figure out how I’m going to get from the start to the end of a scene, knowing what has to happen to make that scene work.

Aja: Plotting can be very complicated! It's good you enjoy it. I read that you're a mother of two. How do you balance so much plotting, writing, and a family?

Jaycee: I don’t know that I really do it all that well, though I sure try. I don’t have a set schedule for writing. I try to write or edit every day, mainly when I get a few minutes here and there and at night. Most of my writing takes place on my sofa. It has a lounger so I can stretch out my legs. Most of the time, I’m also keeping one eye on my son and my daughter and making sure they’re not scaling the walls. My son is only one, so he’s a bit of a climber.

Aja: How would you describe your writing style?

Jaycee: My writing style has a lot to do with voice, and that voice depends on which MC I’m writing. Ivy is a big talker, so the voice for this book reflects that with longer sentences, rapid and heavy dialogue, and not a lot of attention to the world around her, because she’s very much lives in the moment and isn’t always the most observant.

Aja: To wrap up, is there a message in TDM that you want readers to grasp?

Jaycee: That honesty and communication is vital to making a relationship work.

To connect with Jaycee DeLorenzo, visit her Twitter or Facebook.
To check out reviews for TDM, visit Goodreads.
The book is on sale at Amazon, B&N, and Smashwords.

About The Author:
Jaycee DeLorenzo hails from Tucson, Arizona, on the outskirts of the Saguaro National Park – which she believes to be the most beautiful spread of desert in the world. By day, Jaycee is an English language teacher to elementary students. By night, she’s a wife, mother, writer, cover artist, website designer, and blogger. In her spare time, she enjoys reading, cooking, singing (very poorly), catching up on her favorite shows, and researching.

The Truths about Dating and Mating is Jaycee's debut novel, and the first in a series centering around students of the fictitious Riordan College.
Email ThisBlogThis!Share to TwitterShare to FacebookShare to Pinterest