Courtney from CQ Press has made a book trailer for my debut novel Zarconian Island! Check it out!

If you read it, please tell me how much you love it (or hate it) at Goodreads.
No comments:
Email ThisBlogThis!Share to TwitterShare to FacebookShare to Pinterest

My debut novel is out and I'm on a blog tour! Below are a list of blogs that Zarconian Island and I will be featured on. Check out each blog for exclusive interviews, character posts, behind-the-scenes info, and reviews. 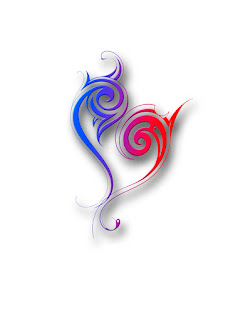 Every Zarconian has a heart-shaped mark on their body and it changes color depending on mood.

Black = Emotionless or Calm
The default color of the Zarconian mark. It means the Zarconian has no singular strong emotion. Many Zarconians learn to remain at a darkened state so as not let humans in on their existance. This also tends to make them appear standoffish or apathetic.

Red = Embarrassment
Blushing, which is essentially blood rushing to the face (or other areas).

Orange = Anger
When a fire gets hotter, it turns from red to orange. The color is aggressive and bright, and it sometimes hurts if you stare at it too long.

Yellow = Happiness
Excitement. Positivity. Think of the sun, which gives life and energy to almost every living thing on Earth. You probably think of the pictures you drew as a kid with the bright yellow sun in the corner, sometimes with glasses on and wavy streaks shooting down. The sun itself, and happy Zarconian marks, give off a light that is nearly blinding if looked at directly.

Green = Jealousy
Green-Eyed Monster, Envy. When someone is nauseated, people say they look "green around the gills." A mark that turns green signals that the Zarconian is sick to their stomach with irritation.

Blue = Fear
The cold feeling of anxiety. Being frozen in place. A rip tide. Unable to stop what's happening.

Purple = Pain or Sadness
A twisted version of fear. Darker. I'm also guilty of liking the alliteration "purple pain" because it reminds me of Prince's "Purple Rain" breakup song.

Pink = Love
Less of a heavy feeling than red, a lighter blush. Lips. No guilt at the rushing blood. Pink hearts.

Anything else you want to know? Another cheat sheet? Leave it in the comments.
No comments:
Email ThisBlogThis!Share to TwitterShare to FacebookShare to Pinterest 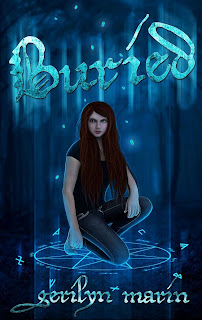 I have the pleasure of featuring author Gerilyn Marin and her new novel Buried. But before I get into the story, Gerilyn told me an interesting story about paranormal activity some years ago.

This very short, true ghost story takes place when she, her husband, and first born toddler were living in her great-grandmother's house. (Because, you know, there's creepy stuff in old houses.)

Gerilyn: It was early in the morning and my husband had gotten up to shower for work, and I closed my eyes and tried to go back to sleep. It must have been a good few minutes later, I was still wide awake and I felt like someone had come into the room—you know that very distinct feeling when someone is near you. I honestly thought I would open my eyes and my son, Alex (who would have been about three years old at this time), would be standing there. Nobody's there so I get up and go through the house, my husband was still in the shower and Alex was in his room, still tucked into bed from the night before, sound asleep.


Authors pull from their own experiences, and I don't doubt Gerilyn has more to this story that she's keeping under-wraps. For more of her ghost interactions, check out her blog tour.

Now, a teaser for Buried!

Like every resident of Fane’s Cove, Cadence McKenna knows her town is, well, odd. And yet, they’re accustomed to the near-daily supernatural happenings- so accustomed, in fact, that when Grey Addison moves to town and stays, she is shocked to find that she’s the only one who insists that there must be something strange about him.

With her life-long—if minor—psychic sensitivity handed down from her grandmother, she knows that what she feels isn’t simple paranoia. After all, how many normal guys pay no mind to random poltergeist activity occurring right in front of them?

Cadence can’t blame anyone for wanting to ignore that there might be more to his presence there- perhaps if he is a normal guy, it’s just the first sign that whatever it is about the town that drives visitors away is fading. She might have even grudgingly let it go, but then she sees Grey acting very suspiciously and knows that she can’t dismiss her feelings until she understands why he’s in Fane’s Cove. Even if it means sticking her neck out by pretending to get close to him . . . and learning more about her town’s history than anyone would ever want to know.
No comments:
Email ThisBlogThis!Share to TwitterShare to FacebookShare to Pinterest

The Aja of Travel

In a few weeks, I'll be on a plane again, heading to the Big Island of Hawaii. In college, I read The Art of Travel and it epitomized how I feel about myself as a traveler.

“Journeys are the midwives of thought. Few places are more conducive to internal conversations than a moving plane, ship or train." - Alain de Botton

On the plane, I will be surrounded by people that I probably won't talk to, and (more likely) won't want to talk to. I am an introvert and I like introspection. To travel by flight is to exist in a place existing between worlds. Around masses of people but all alone. In new cities, but never setting foot on the cement.

Airports are homes away from home. Uncomfortable and exhausting homes with plastic seats and not enough electrical sockets. Outside the giant windows, planes park instead of cars.

"At the end of hours of train-dreaming, we may feel we have been returned to ourselves - that is, brought back into contact with emotions and ideas of importance to us." - Alain de Botton

I like deserted airports in the middle of the night. By nature, I am nosy. Wandering through empty terminals and closed down food shops, I imagine how I could break in if I wanted to. I test doors. I walk the wrong hallway on purpose. I imagine I'm in a post-apocolytpic world and the terminal is my base. I think up settings for a new stories. I mull over what-ifs and run around in my imagination.

But, in the back of my mind, I'm thinking about me in the world; who I am, who I want to be, and who I will be.

And that's always changing, I think.
No comments:
Email ThisBlogThis!Share to TwitterShare to FacebookShare to Pinterest 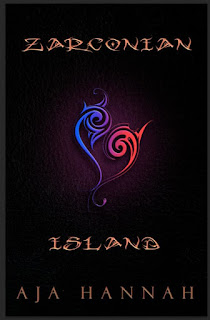 Zarconian Island, my debut novel, comes out on March 25!

The best place to go is Goodreads for all the places to order it.

Want to know a little more? Stay tuned for a calendar of my blog tour. It will feature interviews on Zarconian Island and myself, as well as strange and exclusive pieces. For those of you less patient, I will give you a longer summary.

My stomach knotted tighter, winding so hard it hurt.
Kate watched me, rubbing a piece of her hair between two fingers.
I bit my tongue, trying to work the words out.
"The boat …we're going under.”

Possessing powers that are feared and shunned, eighteen-year-old Alexandra “Attie” Hotep is no virgin to attacks. Her ancestors, the Zarconians-- mixed-blood inhabitants of Atlantis--were rumored to be the English fairies who kidnapped children, the Caribbean sirens that sunk ships, and the dream-like apparitions who broke into psyches. By the 1850s, they were hunted to near-extinction, leaving the existence of Atlantis and Zarconians little more than myth.

When a class trip turns deadly, Attie and her friends become stranded on an uncharted tropical island in the middle of the Pacific, and Attie finds herself targeted once more. With a jungle full of extinct and prowling animals, she struggles to find a compromise between keeping her friends safe and keeping her family's secret.

Enter Doug Hutchinson—the school’s soccer star, and a handsome boy with his own secrets. But Attie and Doug soon realize the animals aren't the only threat. There is a traitor amidst the group, one that plans to turn all Zarconians into permanent myths. And Attie is next on the list.